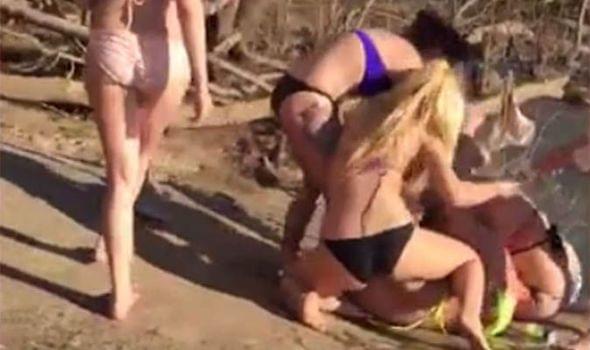 The police have recently arrested three young women because they have committed a terrible attack, leaving the 20-year-old girl with blood pouring from her face and a broken nose.

According to the police report, the girl – who does not want to be named – had been sunbathing with one of her co-workers on the banks of the Saluda River, South Carolina. The three other girls-  Arlinda Craft, 18, Anns Leigh Hill, 19, and Megan Williams, 20, – spotted them enjoying the sun and approached them, pulling their victim’s hair before throwing her to the ground. Then the victim was pinned to the ground and savagely hit and scratched.

It is a shocking fact that around 30 unknown men looked on and videoed the attack. There was only one young female who tried to stop the fight and pull the girls apart, but one of by-standers told her and others to stay away and not to interfere.

The girls who committed that attack were charged with assault and battery on Monday. According to the victim, these girls have been repeatedly bullying her for many years at school.

Needless to add, according to the latest statistics, one-third of kids who admitted bullying others also admitted the fact that they rarely or very rarely spent time with their parents. So. parents, don’t ignore your kids, and do spend time together with them. Plus, it is highly recommended installing mSpy, which can become a safeguarding tool for such cases as that one. Sometimes kids simply do not know how to deal with bullying and parents, having noticed any signs of bullying (both when the kids are being bullied and when they bully others) should act immediately. And mSpy becomes the most suitable informing solution.