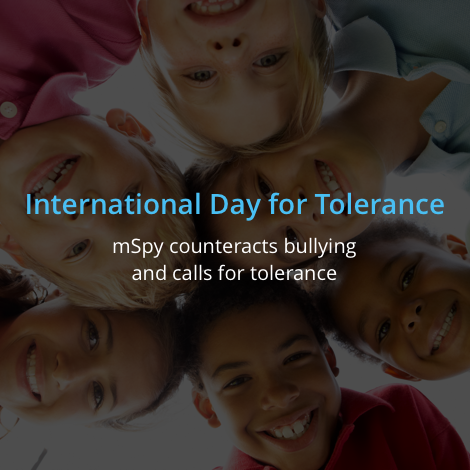 The International Day for Tolerance established by the United Nations is held on 16th of November each year. The day is a focus for educating people about the need for tolerance in society and helping them understand the negative effects of intolerance. Tolerance is a fair, objective, and permissive attitude toward opinions, beliefs, and practices that differ from one’s own.

This year mSpy, the leading parental control app adds its voice to it by counteracting bullying and calls for tolerance.

mSpy over the years has been helping parents counteract bullying among kids. Why is bullying really a ‘thing’? Why do we call for tolerance in respect to that?

Quite recently Brandon Singh Raya a 15-year-old student hanged himself to death allegedly after being bullied in a school in the city of Leicester in the East Midlands region of England.

Bullying is unwanted, aggressive behavior among school-aged children that involve a real or perceived power of imbalance. The behavior is repeated or has the potential to be repeated, over time. Bullying includes actions such as making threats, spreading rumors, attacking someone physically or verbally, and excluding someone from a group on purpose.

Currently, we have another emerging threat via the Internet where kids are cyberbullied via text messages, emails, distorted photos, and mean Instagram messages.

These affect the kids a whole lot than we think. There is increased risk for poor school adjustment, sleep difficulties, anxiety, depression, and suicide in the case of Brandon Singh Raya.

mSpy on this day calls for tolerance because the statistics are alarming:

How can you as a parent know? You can monitor their online activity to prevent online dangers. That is why the mSpy app is available for you. mSpy parental control app allows you to monitor your kid’s text messages, emails, photos, to know whether he/she is being bullied or being the bully. It works on smartphones and computers. All you need to do is install it on the devices you wish to monitor and you can have access to all these features.

In addition, it has the location and Geofencing features that allow you to know where you kids are and set zones or perimeters for them where you will be alerted via email when they leave or enter these places.

In addition to using mSpy to assist you to know if your kid is cyberbullying another kid or he/she is been bullied, it is imperative for parents to educate their younger ones on tolerance.

As stated perfectly by Helen Keller ‘The highest result of education is tolerance.’

Intolerance is also closely linked to an exaggerated sense of self-worth and pride, whether personal, national or religious. These notions are taught and learned at an early age. Therefore, greater emphasis needs to be placed on educating more and better.

Parents need to train their kids on the need to tolerate differences in ideas, body shape, intelligence, race, language talents and gifts. This is because we live in a diverse world and all people are not the same. Each one of us is made special. As we mark this day mSpy, the leading parental control app adds its voice to it by counteracting bullying and calls for tolerance in among kids and the whole world.